THE FACES OF DEATH

When I was a child, every morning I walked to elementary school from our funeral home. But before I left home, I made a ritualistic visit to the room where the dead lay, ready for visitors to view. I approached the casket that cradled our town’s most recently departed and studied the face of the man or woman who rested temporarily in their last but one stop to the cemetery.

My father worked with the faces of the deceased, moulding lips with the tips of his fingers, repositioning the corners of their mouths, forming a final image for their families and friends. Devoid of movement and emotion, the face of a dead person loses a portion of its individuality, though the likeness is still there, like a death mask.

I once returned from Egypt with an artefact. When I first saw it, secreted away in a dark apartment on a back street in Cairo, I was immediately drawn to it and my memories of all the dead faces of my childhood came flooding back. Tea was served as I purchased a delicate piece of papyrus, or linen, on which was painted the face of an ancient Egyptian destined for entombment. This cloth-like substance was the result of the first process in the creation of a death mask. It would have then been soaked in plaster and pressed onto wood. I was assured it was authentic, but I may have been taken for a ride.

Before photography, death masks were the most accurate representation of the deceased. While King Tut’s death mask is probably the most famous of the ancient Egyptians, I’ve found others that are more intriguing to me. 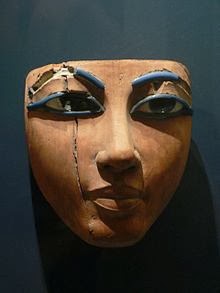 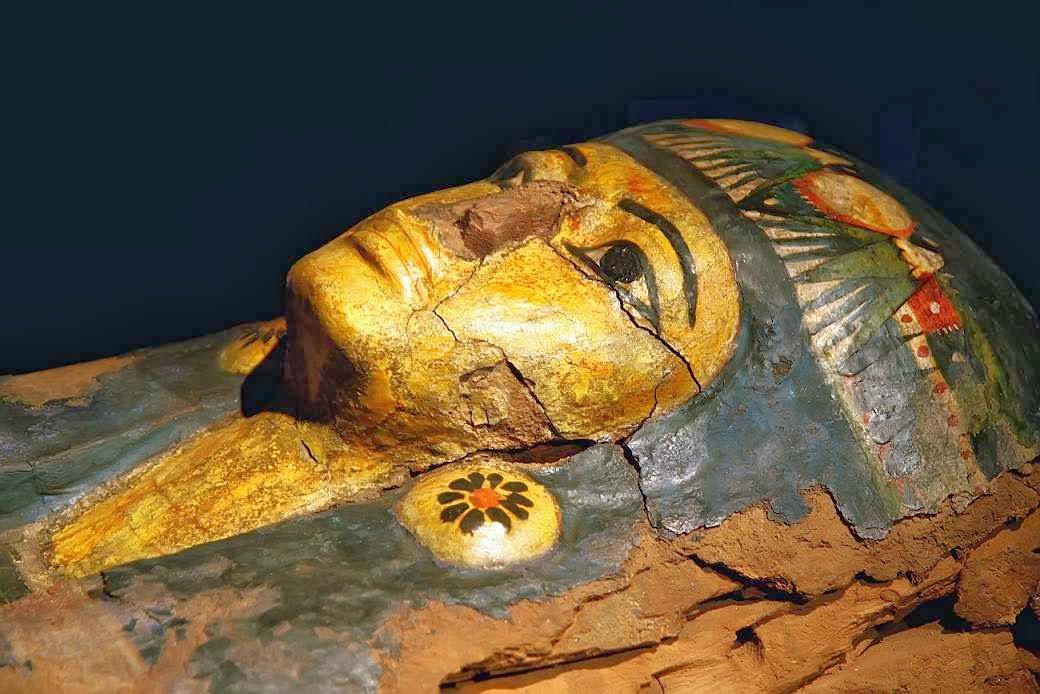 In the 17th century death masks were used as a model for artists who created effigy sculptures for tombs. Usually masks were made just hours after death and having progressed from the wood of the ancient Egyptians, they were produced using a cast made of wax or plaster. 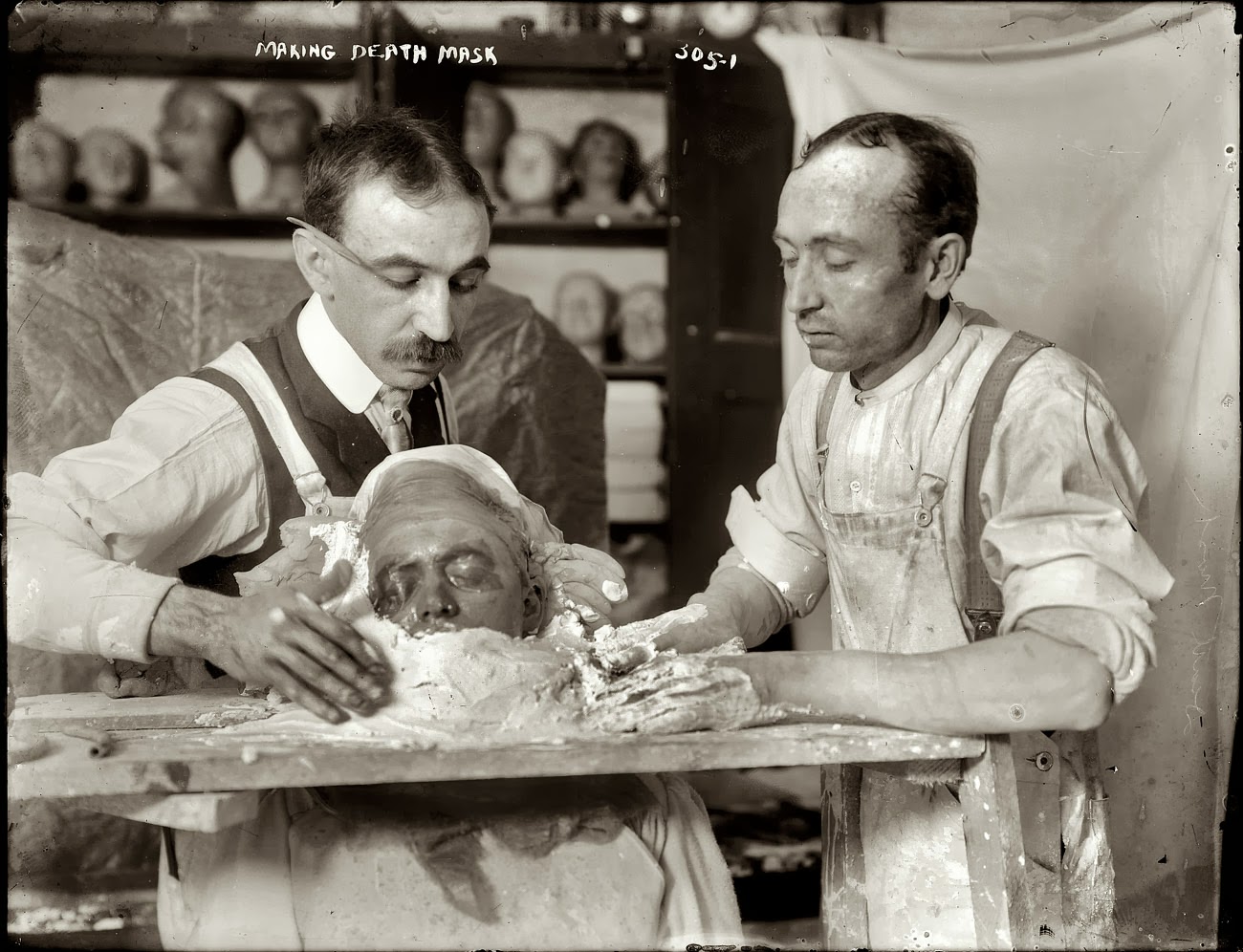 In 1669 Samuel Pepys had a life mask made about which he said, “I was vexed to be forced to daub all my face over with Pomatum (a scented ointment), but it was pretty to feel how soft and easy it is done on the face, and by and by, by degrees, how hard it becomes, that you cannot break it, and sets so close that you cannot pull it off, and yet so easy that is as soft as a pillow.”

By the 19th century, death masks were no longer simply tools for artists. The pseudoscience of phrenology held mainstream popularity and phrenologists eagerly collected death masks to study the skull shapes. The Victorians considered the masks as mementos and used the plaster negative to make multiple copies. It was not unusual for families to proudly display them to commemorate the dead. 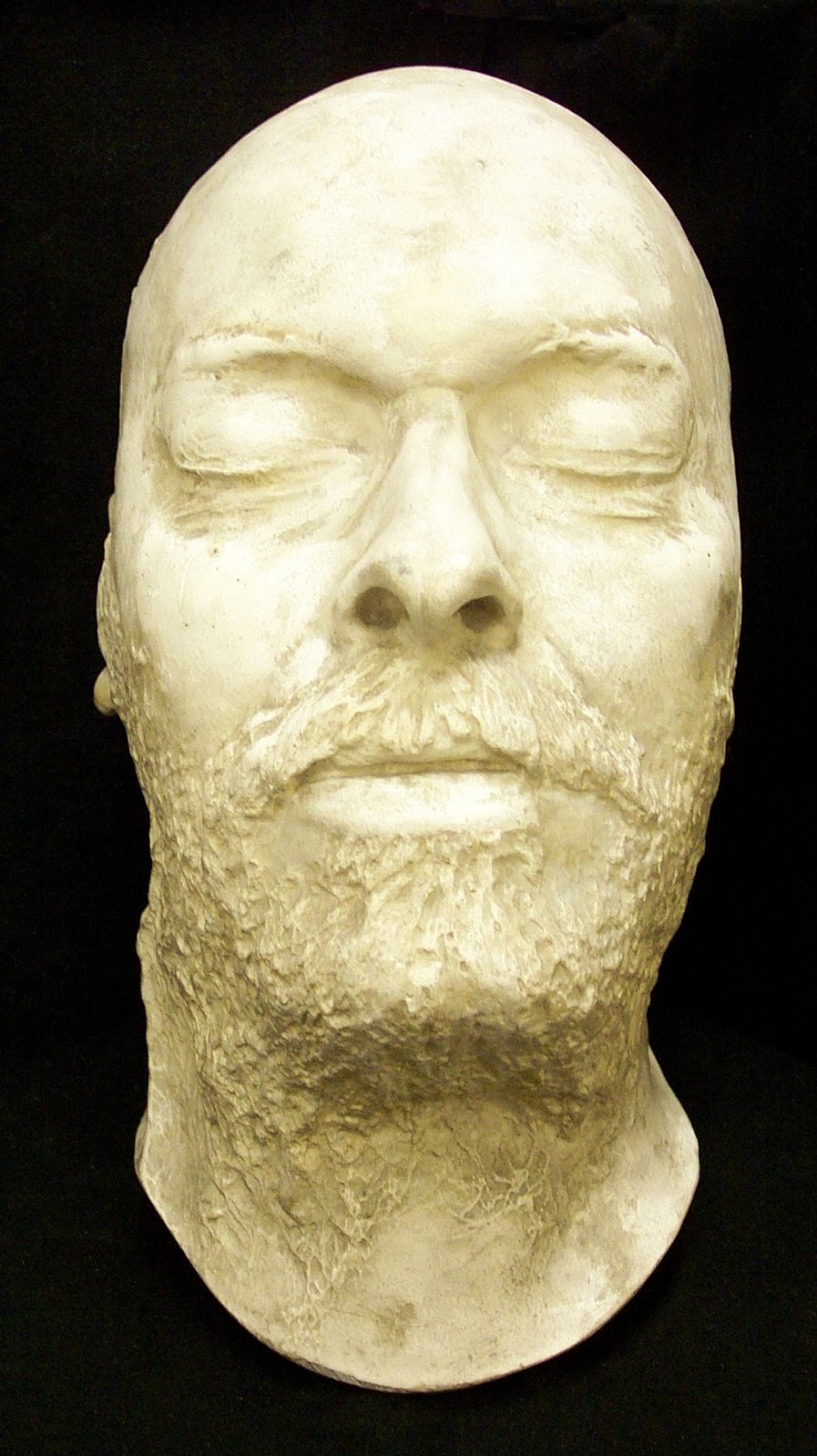 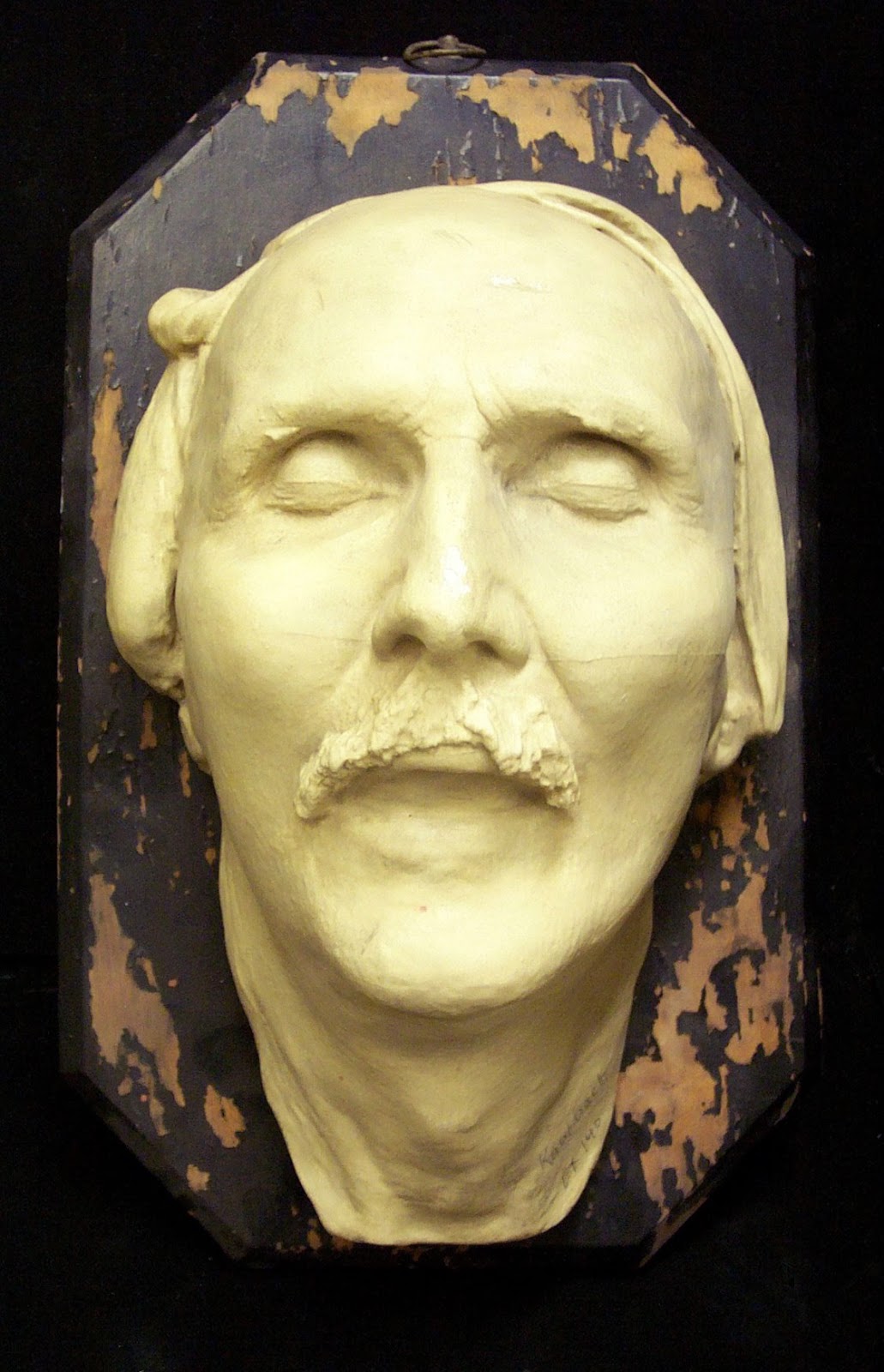 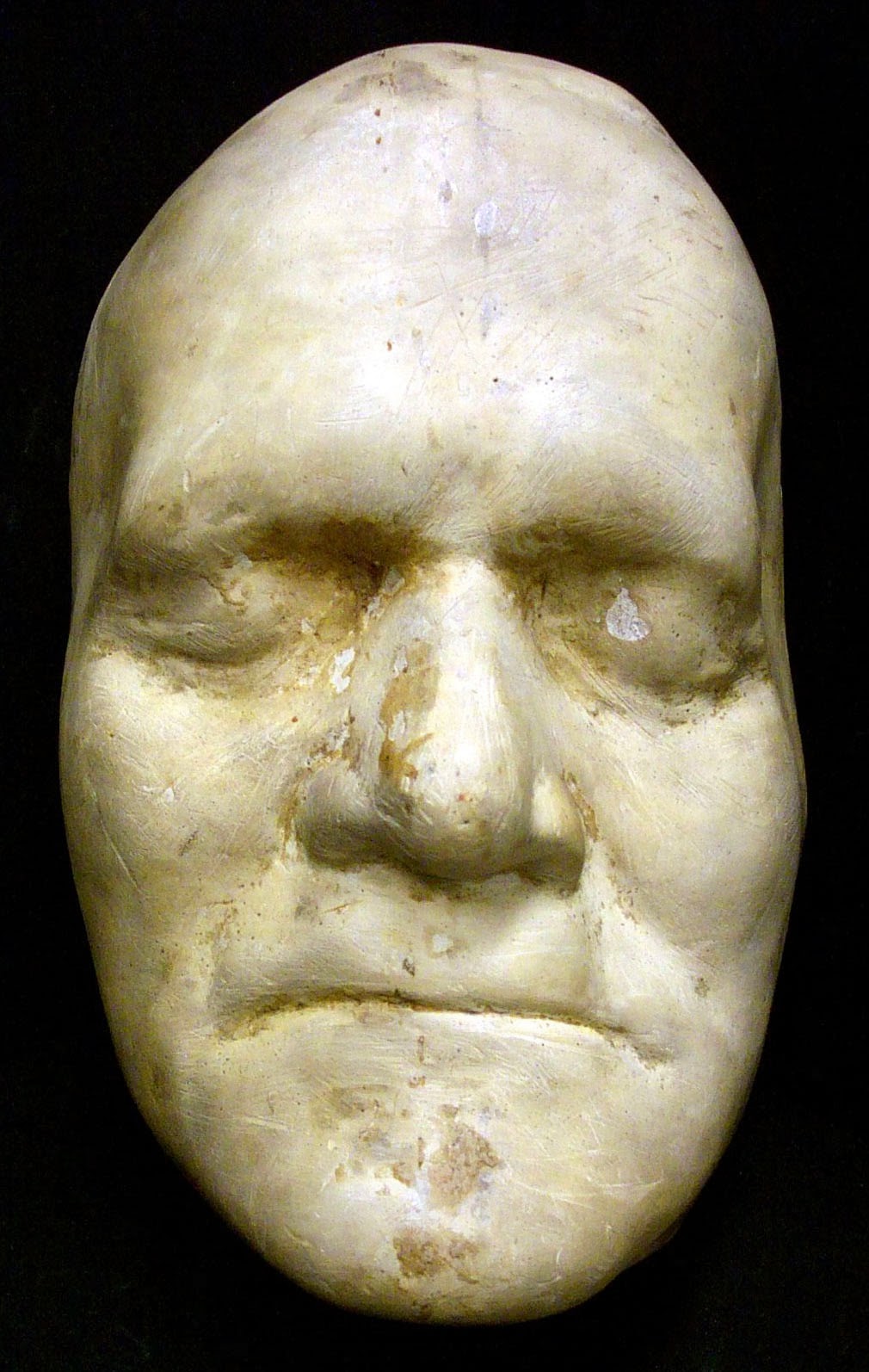 It was a bit harder to find death masks of women. I winced when I first saw this, because of her long confinement and almost prison-like sentence to her bed in life, here she was again captured in death. 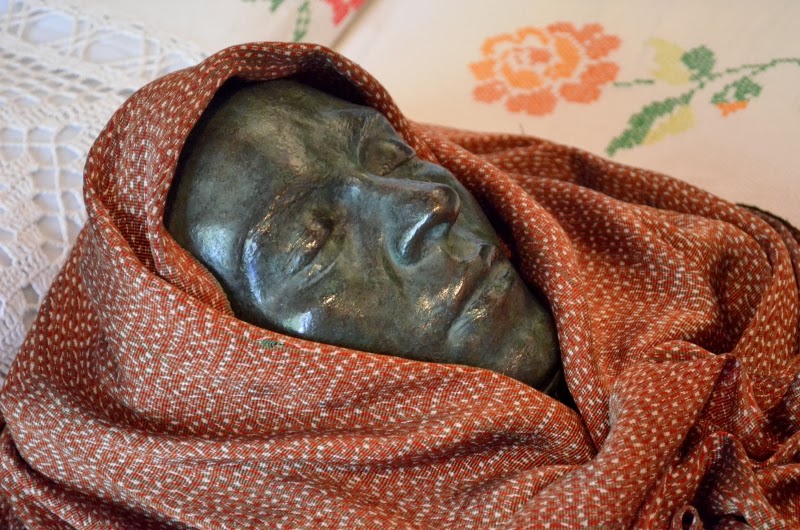 But death masks were also used to preserve the faces of the unknown as in the case of L'Inconnue de la Seine, "the unknown woman of the Seine" who was found drowned in the Paris river in the 1880’s. Never identified, she gained cult status when her death mask, made by an infatuated pathologist, inspired art and literature across the globe, such was her beauty in death. 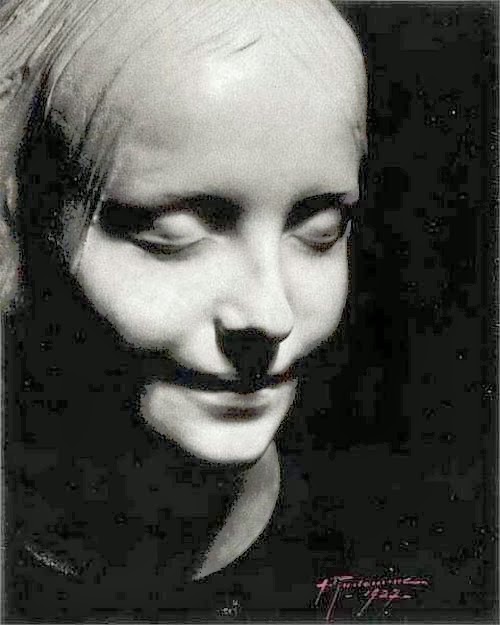 The incredible journey of the drowned woman’s face continued through history when a Norwegian toy maker used her likeness to create “Resusci Anne”, also known as “Rescue Annie” a training mannequin used to teach CPR. 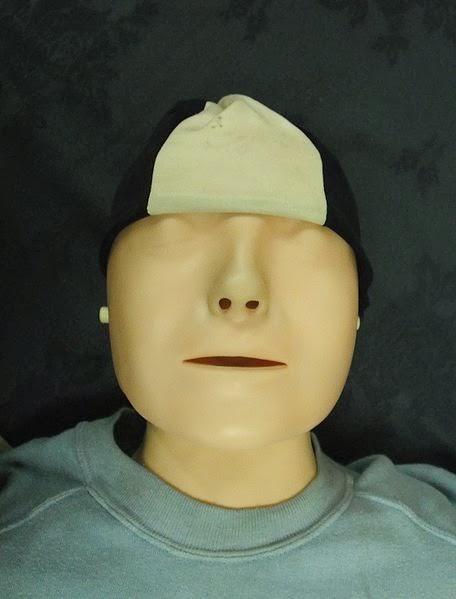 A life taken, a life saved.

Posted by KATE MAYFIELD at 02:41 No comments: Links to this post