Late in the afternoon, possibly the coldest London has seen this year, I headed for the second time in a month to Drury Lane.

I think it was Dickens’ Sketches By Boz in which I first read of Drury Lane in his essay, Gin-Shops:

“we will make for Drury-Lane, through the narrow streets and dirty courts which divide it from Oxford-street, and that classical spot adjoining the brewery at the bottom of Tottenham Court Road, best known to the initiated as the Rookery."

I would have been in high school in Kentucky when I read about gin shops, a rookery and the wretched houses teeming with the whole of humanity in its less than humane state. A setting so completely foreign to me, this Drury Lane, that my only point of reference would have been a little moonshine shack in the backwoods of our “dry” county.

How strange then that I set off with purpose the other day to discover what lay behind the ornately flanked door of the Happy-Go-Lucky Funeral Parlour on Drury Lane. 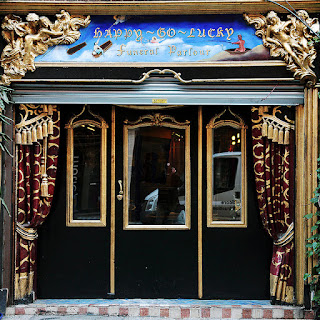 In vain I had already searched Google for a phone number, a website, something, anything I could use to contact them in advance to make an appointment. I had hopes of an interview with an undertaker who I’d already imagined as kind and respectful.  (If you don’t already know, I grew up in a funeral home.)

Nothing. I found no information whatsoever - this should have been a warning of some kind. What sort of funeral home doesn’t want to be found?

I arrived to find the entrance shuttered. 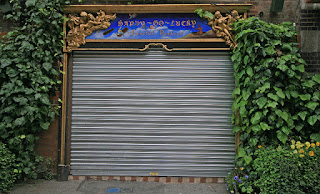 What a disappointment. I stood shivering for a few minutes before I walked away towards Longacre. Then I stopped halfway down the street. What a wimp, what a wuss I was. How silly to give up so quickly. I did an about-face, marched back and opened the door to a shop across the street from the Happy-Go-Lucky. Full to the brim with artist supplies, brushes sprouting from every corner, a young woman emerged from the back to greet me.

“I’m sorry to disturb you, but do you know anything about the funeral parlour across the street?”

“As a matter of fact, I just tried to Google them the other day and couldn’t find out a thing.”

“I’ve never even seen anyone come out of there,” she said.

“Oh, I have. On Valentine’s Day. I walked by with two friends and a man stepped out of the funeral parlour holding a broom. He wished us a Happy Valentine’s Day. That’s why I came back. Life does exist in there somewhere.” 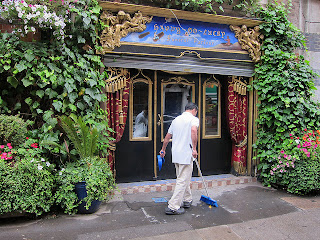 I crossed the street and again had almost given up when I began to snoop around the restaurant next door to the Happy-Go-Lucky. There are velvet-cushioned seats, the kind that are normally tucked underneath a lady’s dressing table, framed in floral displays and set along the wall of the building. They looked forlorn outside in the cloudy cold. Overly dramatic arches of greenery created a covered path to the restaurant’s entrance.

I stepped inside and was immediately visually accosted by the lavish décor. It was late afternoon, before the magic of the light of the numerous chandeliers struck the glassware. The tired, cheap designs and gimmicks were apparent; a mix of Gothic, Rococo and others I didn’t recognize. It looked like the morning after of a bacchanalia of decorators. Then it struck me that the murals bore a curious similarity to the painting above the funeral parlour’s entrance.

It was quiet in the restaurant, no customers yet filled the elaborate balcony seating, the opera boxes, or the long tables set for the evening – the place was huge. A waiter approached and when he heard my questions he referred me to yet another waiter who finally introduced me to the hostess. An older woman who had been sitting in a dark corner watching me rose and made her way toward me.

“Do you know anything about the funeral home next door?”

“No, no,” she said in a thick accent that I couldn’t quite place, her language formal. “It is not a funeral home. It is our office.”

“It is just a joke. We think it is funny. You know, most funeral homes – they are so serious.”

I began to feel a bit sour.

I put my gloves back on and as I did so these were her last words to me:

“Please do not die in here. We will not be able to take care of you.”

Posted by KATE MAYFIELD at 04:42 10 comments: Links to this post