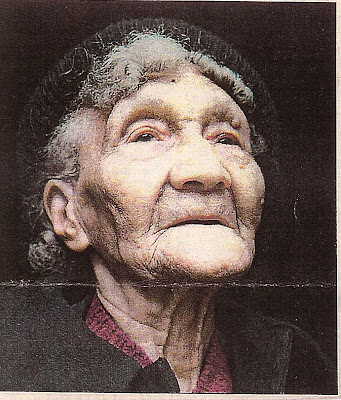 I was nervous the first time I met Miss Alberta. Did I have the right to intrude upon her privacy just because I once lived in the same house in which her great-grandmother was born a slave? I had a little talk with myself to make sure my interest in her was ignited by a genuine quest to make some sense of why and how our paths crossed.

We first met on neutral territory – a library. Books ease all things. With her was Clara, a lady who had been Miss Alberta’s caregiver, friend and protector for well over twenty years. At the time, Miss Alberta was 94 years old and as bright, intelligent and clear-headed as a woman twenty years younger. As we began to get a sense of each other, I noticed her long, elegant fingers clutched a plastic bag.

She produced a volume of self-published poetry that she’d spent most of her life writing. 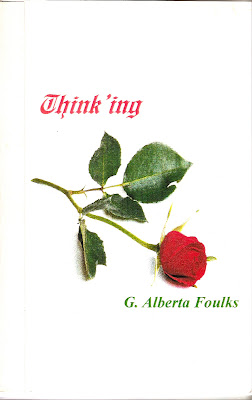 Then Miss Alberta invited me into her world. On a stifling August morning, so hot that the air quickly dampened my skin and curled my hair, I drove along the gravel road that was Bibbtown, although Bibbtown was not a town, not even a village. It was named after Major Richard Bibb, the Revolutionary war hero who, in 1820, owned over one hundred slaves in Kentucky and built his antebellum mansion in a small town, a few miles away.

This farmland acreage on the outskirts of town, deeded to Bibb’s former slaves, was barely touched by modernity except for a few telephone lines and even those disappeared as I approached Miss Alberta’s home. Her one room trailer sat a few yards from the church. Her farmhouse and all of her possessions were destroyed by fire in 1977. It was then that Clara first came to her aid. Miss Alberta lived without electricity, a telephone, or running water. Clara rigged up a generator and a gas contraption of which I never understood the workings. Miss Alberta was a pack rat, so reams of paper, books, and odd items were stacked to the ceiling. This fire hazard often caused Clara sleepless nights. 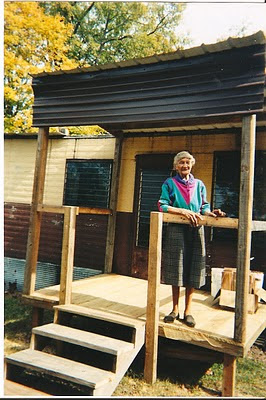 Miss Alberta was no longer able to work the fields of her ancestors on which she had raised tobacco and gardened, but she still cared for the 150 year old Bibbtown African Methodist Zion Church, also called Arnold’s Chapel, that her relatives helped build. There were only three members left, but as long as she was able, she cleaned it and readied it for monthly services. We approached the simple white clapboard building to the tune of Miss Alberta’s big set of keys that dangled in her hands. Its solitary decoration, an unassuming cross on the roof’s peak represented the only clue that it was a church. 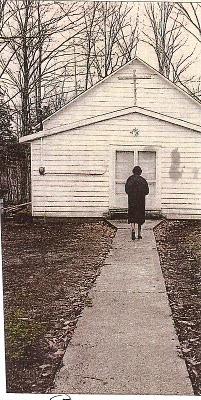 I was not prepared for the beauty inside. The hand crafted hardwood floor supported solid wooden pews the color of molasses, shiny and smooth with wear. The mint green walls were cool and a respite from the sun. An old upright sat against a wall and Miss Alberta asked me to play. She was a deeply religious woman, but a non-believer in denominations. She fancied singing a hymn. I hadn’t played a hymn since I’d lost my baby fat and the F key and it’s cousin F sharp failed to produce a sound, but we muddled through two verses and it made her happy. 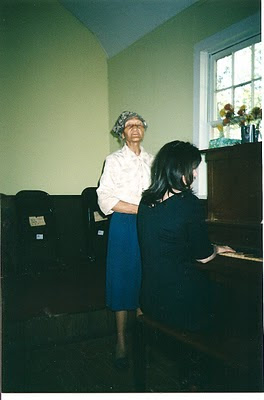 She then chose a pew and we sat quietly together until she was ready to speak.

“My great-great grandmother worked in the big house. And my great grandmother Catherine was born there. Major Bibb, his reputation was supposed to have been spotless, was Catherine’s father. Against her will. That’s why my family’s so light skinned. That happened a lot back then.” 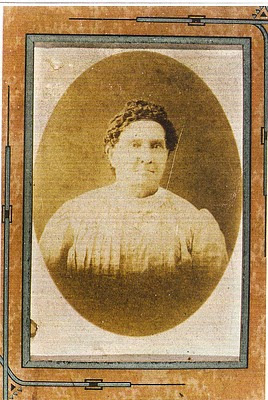 She looked away from me when she said, “I didn’t know my father, either. I know today that kind of thing is accepted, but back then it was deeply shameful.”

The “big house” eventually ended up in the hands of an eccentric, but business sharp elderly lady who wore no other color but red. I visited her frequently as a young girl. She bequeathed the house to my father. We moved out of the funeral home where we’d spent most of our lives and into the antique-filled antebellum home. Then we lost it, but that’s another story.

Before I left her that day Miss Alberta told me that many years ago a lady in red came to see her. She too sought to unravel the tangled threads of the history of her house. 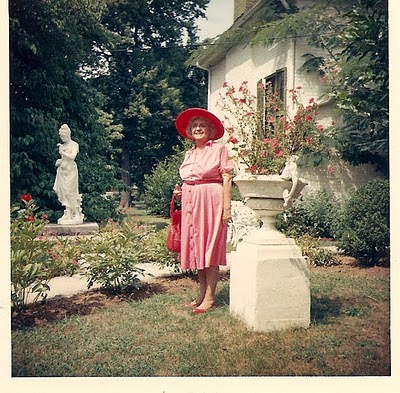 When Miss Alberta celebrated her ninety-ninth birthday, Clara was her biggest cheerleader. She tried to positive-talk Miss Alberta into staying for another year, to hang around for the big one. But Miss Alberta was tired and ready to go. We lost her that year. 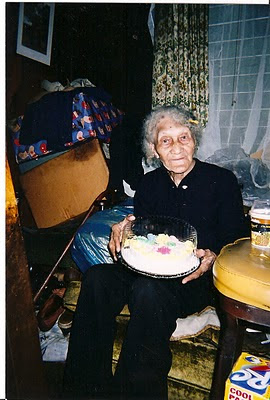 Posted by KATE MAYFIELD at 08:17 4 comments: Links to this post

Email ThisBlogThis!Share to TwitterShare to FacebookShare to Pinterest
A RECIPE FOR DISASTERS

I lied. Mostly to myself, but still, I lied. I said I would never, ever post a recipe on my blog. So many people do it beautifully. But here’s the thing of it. The day before New Year’s Eve the heating broke down. From the 30th of December until January 8th I survived a cold week in hell. London hasn’t experienced a winter like this one for thirty years. Space heaters were a runaway best seller at the local hardware store. I became intimate with four of them.

I can’t imagine how I came down with a stomach virus during the takeover of the flat. The heating guys were incredibly nice, but I felt a shade of green as I answered their calls for things like a bucket, a broom, paper towels, tea, (my contribution to keep them happy) and a number of other things that you can’t imagine a heating specialist would need. Each time I tried to lie down to stop the room from spinning, someone called my name, or everyone’s phone rang at the same time, or they pounded on the pipes. Then one of the guys smashed his finger with a hammer. Suddenly there was blood in the oddest places. The new boiler fell off the wall and almost landed on top of the same poor guy. For days the design element of the bathroom took on a Jules Vernon atmosphere. 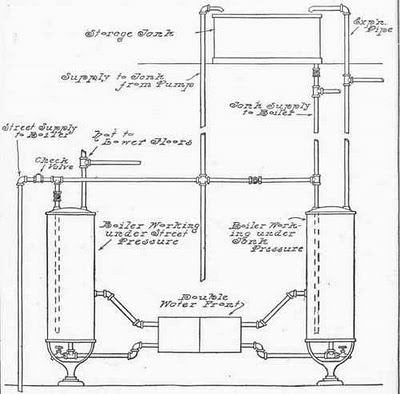 I must have been the only person in the UK to lose weight during the holidays. I needn’t have worried about the chocolate tart or the Danish birthday cake I ate before the traumatic New Year. I couldn’t eat for a week. When my appetite did roll around again the only thing I wanted to eat was what I consider one of the best recipes for the winter months. Ever. Ever. It’s not pretty, although I’m sure a food photographer could manage to do something with it. I’ve cobbled together several recipes, but most of the credit goes to that longhaired genius in Dorset, Hugh Fearnley-Whittingstall of River Cottage fame. This recipe of Minestrone will turn you into a deity, no, scrap that, not really; it will make you extra special to those who already love you and endear you to those who don’t.

You’re going to need some of this. 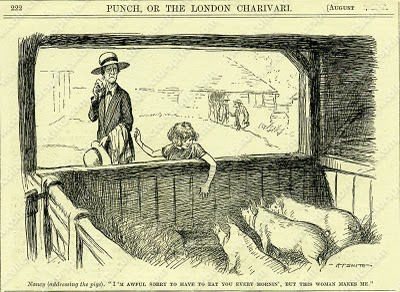 If you’re a vegetarian or Kosher, then I’ll see you on the other side, because while you can make it without pork, it won’t be quite the same. If you’re lucky and are able to buy diced pancetta, then glory hallelujah to you. If not, lardons will be your next choice. And woe is you if there are no lardons in your grocery, you’ll need to dice some pancetta or bacon, preferably from a thick cut piece.

You’re also going to need a chunk of this. 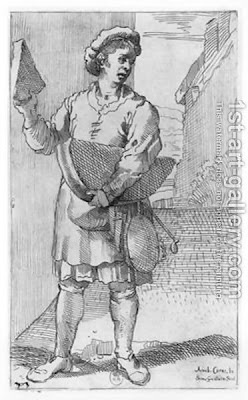 Ever wonder what to do with that Parmesan rind? Ever scrape the skin off your fingers by grating too close to that nasty rind? Those days are gone, my friend. When all things great and small are in the pot and beginning to simmer into untold goodness, you are going to toss that humble rind into the pot. Why? Depth. We’re talking about adding Freudian type depth to your Minestrone. That’s depth, not death.

And you will need a lot of stock made from one of these.

Secret tip. I use organic chicken stock cubes and water and lordy, lordy, it works every time. Don’t have to make your own stock or buy Chef Incredible’s hand wrung chicken stock from Bavaria. Or, if you’re in the States, you can use the canned variety. Sadly, we don’t have those darling cans in the UK. Go figure. I'm feeling a bit homesick at the thought.

You’ll be using several of these, too. 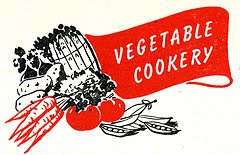 And none of this stuff. 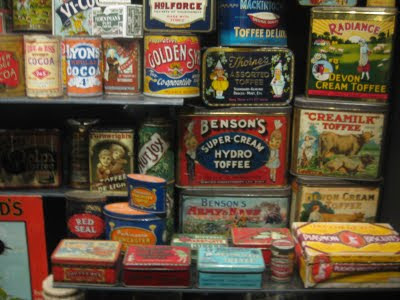 And when you put it all together, it will look like this at first. 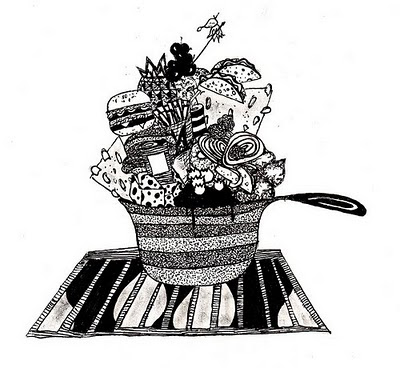 I told you, it's not a pretty dish. But not to worry, it will cook down after a while. 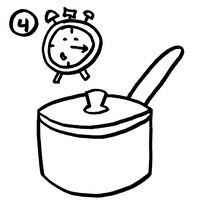 And now go do something else. Personally I think it’s always time for this. 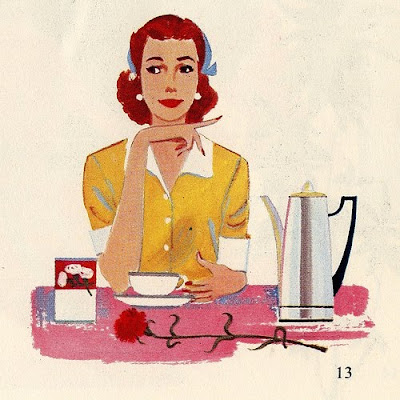 So, here’s the recipe in full. I’d love to know how it turns out for you. But only if it’s good.

6 ounces (130 grams) of pancetta or bacon cut into cubes

2 tsp fresh thyme leaves, or throw a few stems in and pick them out later

1 can of chopped tomatoes

1 can of cannellini beans, drained and rinsed (or, ditch the potato and add another can of beans)

½ cup (80 grams) of small pasta, such as macaroni or tubetti

Warm the olive oil in a big pot, then add the pancetta and saute until golden. Add the carrot, onion, celery and saute on low heat, stirring until soft, about ten minutes. Add the garlic, potato, cabbage and thyme and cook until the cabbage wilts. This won’t take long. Add the kale and cook until it wilts. This won’t take long either. Add the tomatoes, the stock and your new best friend, the Parmesan rind, and cook on low heat, partially covered for 40 minutes. Add the beans and pasta and simmer for 20 minutes. Add more stock or water if it looks too thick, although thick isn’t a bad thing. Don’t add salt until you’ve tasted. Depending on your stock you may not need it at all. Seriously. Add pepper and throw in the parsley. Taste again for seasoning. Serve with the grated Parmesan. Expect numerous OMG’s and compliments. This recipe makes a ton.

Posted by KATE MAYFIELD at 09:06 2 comments: Links to this post