DANCING TOWARDS THE LOLLIPOP CEMETERY 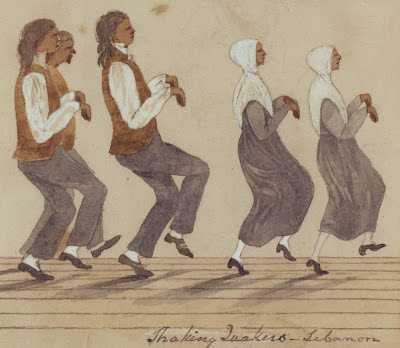 At the steaming height of most summers my parents dragged me away from the air conditioning, into the car and down a country road ten miles to Shakertown. We entered a large tent set in a field where we sat for three hours on thin wooden bleachers, the music of crickets soon overwhelmed by the evening’s theatre. I grabbed a paper fan from the grass as the re-enactment of the story of Mother Ann, a religious visionary from 18th century England, unfolded in fits of song, drama, and dance.

Avant-garde, revolutionary, even touted as a miracle worker, Mother Ann, an illiterate factory worker from Manchester formed the Shaking Quakers, better known as The Shakers. Their utopian, strictly celibate, and self-sufficient communities grew from a small group that immigrated to America in 1774 into flourishing communities, the southernmost of which was formed where I sat swatting mosquitoes in the humid night air. At their height in 1840 more than six thousand believers lived in nineteen communal villages from New England to Ohio and Kentucky, and there were twenty thousand members over a century.

The most eccentric and defining aspect of the Shakers was their form of dance, the earliest of which was spontaneous. They whirled themselves around, trembling and shaking ecstatically until they fell to the floor in a trance. 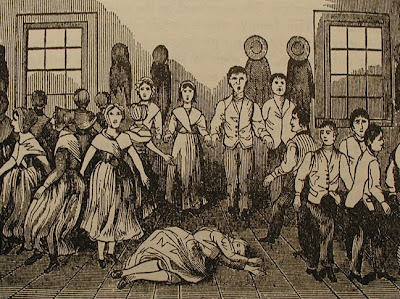 In the early 1800s choreography entered the worship service. An anonymous visitor described the preparation:

"At half past seven p.m. on the dancing days, all the members retired to their separate rooms, where they sat in solemn silence, just gazing at the stove, until the silver tones of the small tea-bell gave the signal for them to assemble in the large hall.” 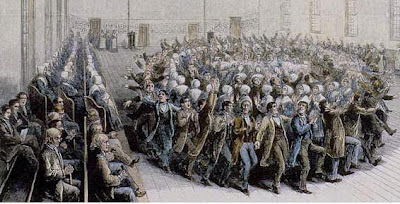 They believed the dance kindled the fire of truth and the shaking warded off evil. As described in an article in The Telescope in 1909, the choreography became ritualistic and stylized.

“A number of singers, probably a dozen or so, both sexes, would take their position in the middle of the room, half of them facing the other half, and begin a kind of song or chant.  While doing so they would step back and forth in a fashion resembling a double shuffle. If the spirit seemed to move the watchers, they would rise and, two abreast, would begin marching round the singers in the center. Soon the march would turn into a dancing step, the faces would be uplifted, and the hands outstretched, palms upward, with a gesticulation as if the worshipers were grasping for blessing falling down from heaven. This would be continued indefinitely, sometimes the marchers and dancers falling from sheer exhaustion." 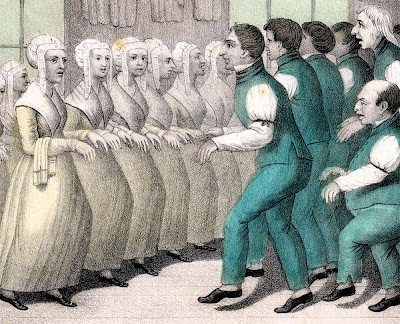 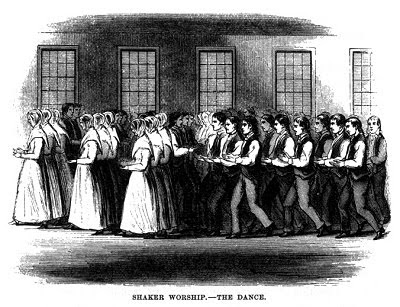 All of their hymns, songs and music were composed and written by their members, generally, under ‘divine inspiration’. They developed their own form of music notation known as the "letteral system" using letters of the alphabet rather than conventional notes. 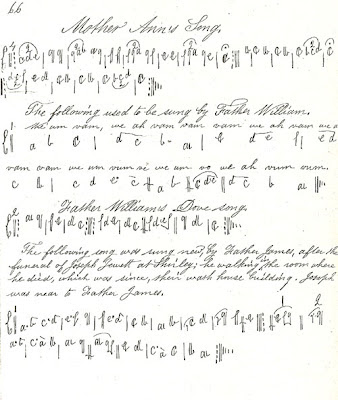 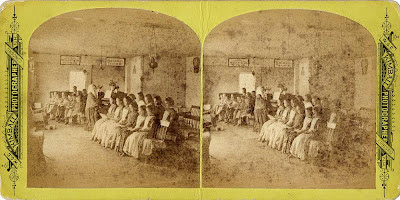 In 1944 one of those tunes was resurrected and hit the world stage. Aaron Copland said he was thinking neither of Appalachia nor Spring when composing his now iconic ballet. Martha Graham renamed Ballet for Martha by using a line from a Hart Crane poem. Spring represents a body of water, not the season.

And northward reaches in that violet wedge

Copland, who was known for using folk music in his ballets, steered away from this habit in Appalachian Spring with the exception, ironically, of one obscure Shaker tune – “Simple Gifts” – which he used as the basis of the finale and which then went on to become the most famous melody of the ballet. "Simple Gifts" was composed by Elder Joseph Brackett and originated in the Shaker community at Alfred, Maine in 1848. It was not a hymn, or song of worship; it was written specifically as a Shaker dance song.

A century after the queer Shaker dances were formalized and the lyrics ‘Tis a gift to be simple were penned, the collaboration between Copland and Graham was born and lauded as groundbreaking. One wonders if she studied their movements for the similarity is striking. 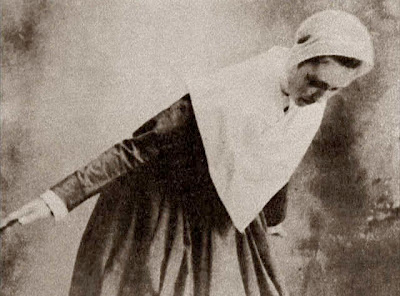 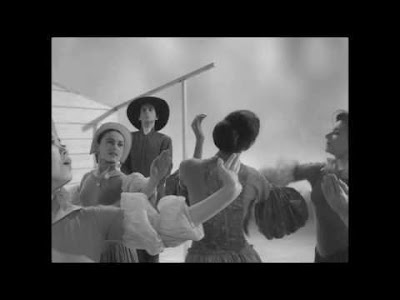 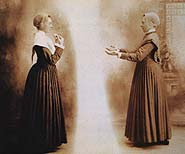 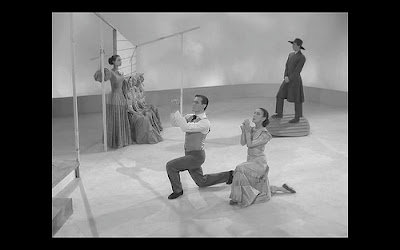 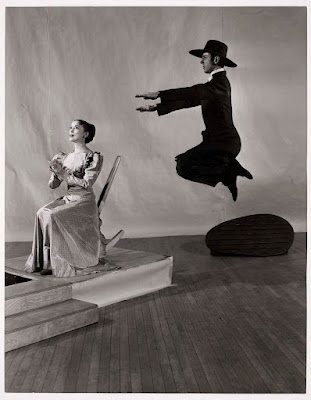 By 1911 that last of the original Shakers were dying. To attend a funeral of a Shaker one would think it was anything but. The funeral was an important religious service in their community and they looked upon death as a joyful occasion. Funerals were attended happily and with smiles. The women wore white along with their strange, tight-fitting bonnets with a frill at the back.

In the former Shaker community in Harvard, Massachusetts lies a unique, one acre burial ground. The tombstone markers of individual Shakers including their death dates have been preserved. Created in 1792 using stone markers, a few of which are still in place today, approximately three hundred Shakers are buried here. In 1879, the town removed most of the stone markers and replaced them with cast iron markers in the unusual shape resembling a lollipop. 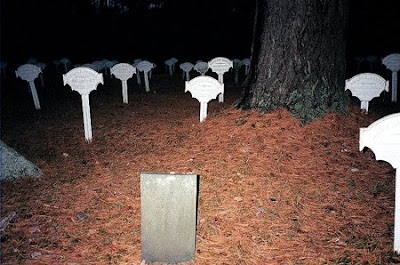 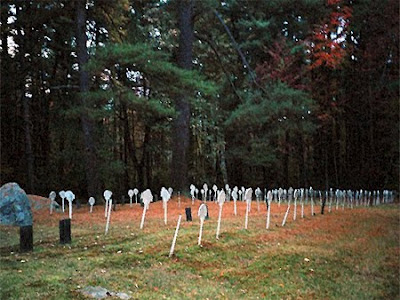 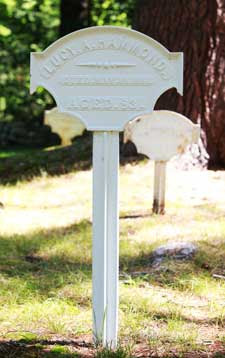 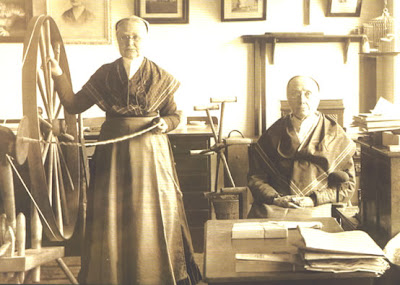 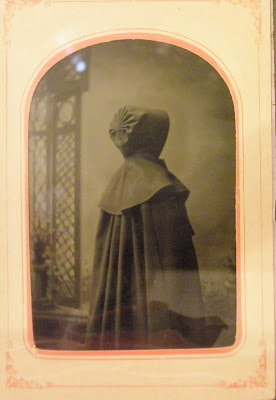 Posted by KATE MAYFIELD at 06:26 5 comments: Links to this post