A SPARK OF CELEBRITY AT THE FUNERAL HOME

I once asked my father if anyone famous lived in our town. When I think back to this I am amazed that he answered seriously.

Poor old us. The sum of celebrity sightings in the town where I grew up was:
Celebrity – 0
Regular people – a little less than 9,000

Apparently we were once a hotbed for any travelling performer who passed through. In 1903 an architect from Chicago swooped down to Kentucky and built an opera house in our town.

There was nothing even faintly operatic about the kind of shows that somehow reached our little enclave. The religious element was so fierce that to call it what it really was, a theatre, was not allowed. The opera house debuted one night stands with performers who made themselves at home for a few hours in the dressing rooms. Vaudeville and minstrel shows played to audiences who sat eagerly in the boxes and balcony. Lectures were popular, as were home talent shows in which I can only imagine parents and spouses elongated their posture and puffed their chests out proudly while neighbours cringed inwardly. 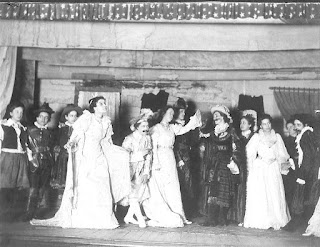 The opera house closed during the war and like a product on an assembly line, it was passed from owner to owner.

At long last the drought grew to an end when the biggest celebrity our town had seen in a living breathing person stopped by our funeral home out of necessity. He was also the smallest celebrity to ever walk among us.

My father called him a live wire. His personality contained a tall dose of high-octane charisma, though he stood less than four feet tall at his adult height. His real name was Johnny Roventini, but by a stroke of luck in 1933 he became the most famous product spokesperson for Philip Morris Tobacco Company, so much so, that he became known only as Johnny Philip Morris.

In 1929 the construction of the Hotel New Yorker was complete. 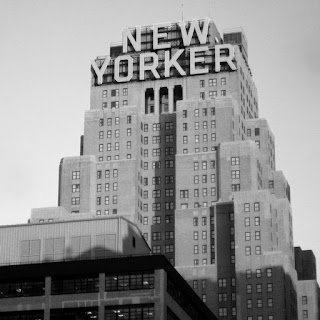 Along with its 43 stories and 2,500 rooms, it boasted that ‘the hotel's bell boys were 'as snappy-looking as West Pointers’.  Their uniform: red-trimmed black cap with a chin strap, a bright red tunic with gold buttons, red-striped black trousers, and white gloves.

In 1933 Mr. Biow of the Biow Agency landed the lucrative Philip Morris Tobacco account. In a stroke of Mad Men genius, he focused on the fact that the cigarettes had a man’s name and thought it might be unique for a bellboy to page the non-existent Philip Morris. Biow was advised to sit in the lobby of the Hotel New Yorker to observe a 22-year-old bellhop. Johnny Roventini had suffered a pituitary gland disorder that not only halted his growth, but also the development of his voice, which he now used to call out a perfect B-flat tone naturally and clearly for every ‘page’.

Mr. Biow approached Johnny with a dollar in hand and asked him to page Philip Morris. The bellboy was unaware that Mr. Morris didn’t exist and repeatedly called out, “Call for Philip Morris” in his distinctive voice. Johnny was upset that his page went unanswered, not knowing he was essentially auditioning. Later he was quoted in Variety, "I went around the lobby yelling my head off, but Philip Morris didn't answer my call. I had no idea that Philip Morris was a cigarette.”

Johnny became a living trademark. For the next forty years he was never seen out of his bellboy uniform and was heard around the world, first in radio advertising, and then in broadcast media, notably helping the I Love Lucy show kick-start its success. 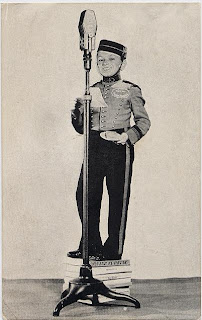 The demand for thousands of pubic appearances in store openings, parades and other public events summoned the need for dozens of “Johnny Juniors” who made it possible for him to be in two places at once. But there were no impostors in our town; we met the genuine Johnny. We lived in tobacco country and every year the Tobacco Festival took an all-consuming and prideful place in the autumn line-up of events. One would think we were organizing Macy's Thanksgiving Day Parade. It was the perfect venue for Philip Morris, and Johnny was a parade-appearing aficionado by that time.

For twelve years he sat on the back of a white convertible in our parade and called his page for Philip Morris without amplification. And the crowd went wild… 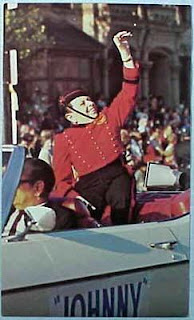 Our funeral home, which was on the residential end of Main Street, provided the perfect position in which to view the parade. I ran back and forth from a window upstairs to other vantage points, both downstairs and on our stoop where our front door was open to the community. Before and after the parade, Johnny came running into the funeral home badly in need of a cold drink and to answer the call of nature. He took the time to shake everyone’s hand and thanked us for our hospitality. I absolutely dogged my father to search for me if I wasn’t around for Johnny’s arrival. For a couple of those twelve years my younger sister was near his height and could not understand why he spoke to her as if he were an adult. Even though he was well into middle age when we met him, she couldn’t grasp his miniature stature and basically wanted him to be her playmate. She was especially confused when he patted her on the head. I’ll never forget his kindness and his full acceptance of how people reacted to him. 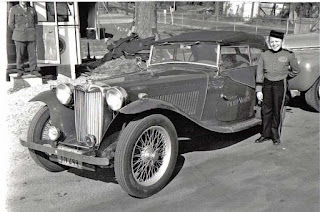 By 1970 Congress had banned the advertising of cigarettes on television and radio. Johnny retired in 1974. He never married and died at the age of 88. 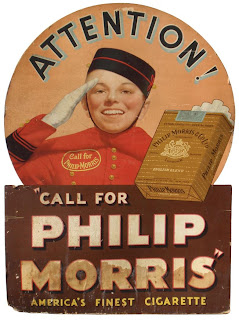 Posted by KATE MAYFIELD at 16:22 6 comments: Links to this post