THE TOMBSTONE THAT GOT AWAY 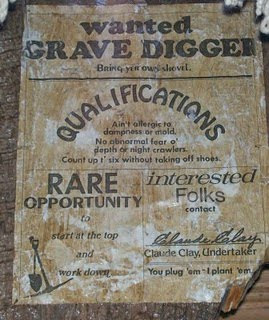 As a young girl the most natural thing in the world to me was to play in the town cemetery. I often hopped in the car with my father when his business took him to our town’s burial ground. He checked on graves, stopped by to place a marker in the rich soil, or had a word with his gravediggers. 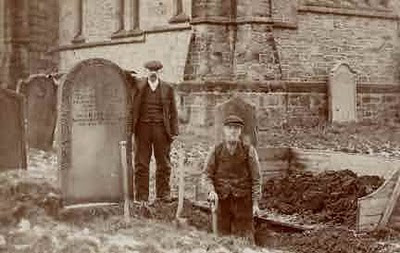 A tent often protected a fresh, open grave until the graveside service was over, or in case the skies poured before it was time to backfill. If a storm blew through we drove by to make sure the tent hadn’t collapsed. There was always something to do at the cemetery. 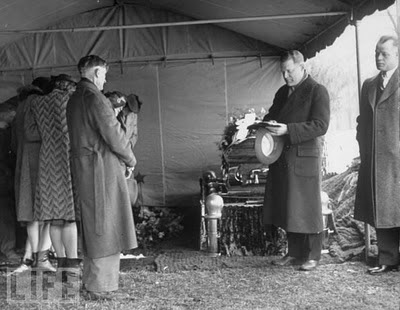 We spent a lot of time across the street from the cemetery sitting at a Formica counter where he drank coffee with the men. 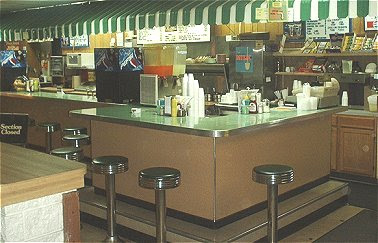 A waitress with a beehive and large orange lips always gave me a wink before setting a plate of pie topped with a tall meringue in front of me. I twirled around on the stool, fork in hand and admired the view of the cemetery from that perspective. 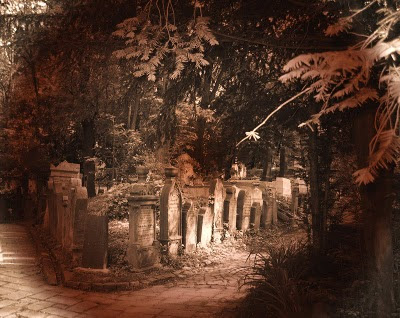 One day my father reached into his pocket and pulled out a large iron key. It was the key of mystery, the key that opened the door to an anomaly; there were only two mausoleums in our county. 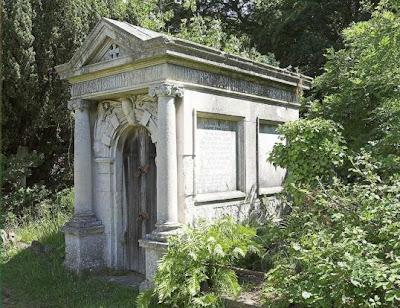 My father fiddled with the key in the rusty lock and struggled with the heavy chain on the door. When my eyes adjusted to the darkness, I was surprised to see how small the space was. He explained the drawers and answered my questions about the strange, deceptively empty storage room. Stone vases jutting out from the wall awaited fresh flowers. I was relieved to spot a small vent at the top of the wall. At least we wouldn’t suffocate if we were accidentally locked in. The mausoleum really wasn’t as much fun as I expected.

Tombstone, gravestone, monument, headstone - all names for the thing that marks a plot of land and the person who was. My favorite cluster: 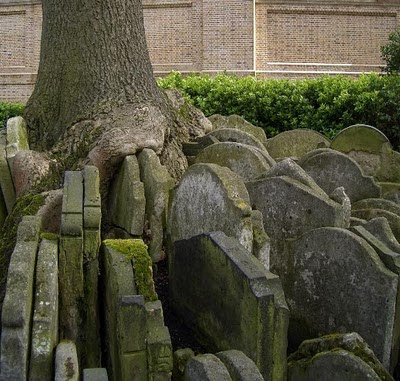 I was partial to a particular tombstone erected in the early nineteenth century decorated with images of the deceased husband and wife, each sepia toned photo was displayed on porcelain plaques and framed in brass ovals. I visited their tombstone regularly, as if I knew them.

Many years later, although too soon, much too soon, my father died an early death and was buried in the cemetery in which we’d spent so much time together. Years later still, I came back to the cemetery to visit his grave. I felt I had a complete intimacy with our little necropolis. I thought I knew every turning, every tree, every tombstone that marked the path to my father’s own tombstone. I drove through confidently with my British husband, who was visiting Kentucky for the first time and already in a deep state of culture shock, when the unthinkable happened. I couldn’t find my father’s grave.

I drove round and round in circles. The paved pathways in the small cemetery, hardly roads, had no names, but I was certain of my surroundings. “I’m sure it’s here.” I said one too many times. I drove down different paths; perhaps the cemetery had grown a great deal more than I thought. I stopped the car, laughing at how ridiculous it was. I got out and walked around, then got back in and drove around again. After an hour of this, my husband, perplexed and attempting to be helpful, gently suggested that we’d been on this route before, perhaps we should ask someone. “You must be joking. I absolutely will not ask anyone where my own father is buried!” But the fact was that I couldn’t find his grave and now it was not funny at all.

I tried to remain calm, but in all truth, I verged on the hysterical. How was I to tell my mother that someone had stolen my father’s tombstone? I didn’t know how and I didn’t know why, but stolen it was. It was the only possible answer. I called my sister.

“Are you sitting down, because I have something terrible to tell you.”

“I don’t know how we’re going to tell Mother.”

She burst into laughter.

I was shocked into a stupor of silence by her reaction.

“We had it removed for further engraving. We’ve just now gotten around to it. It’ll be ready in a couple of weeks.”

“Oh.” Long pause. “I thought it was something like that.”

Posted by KATE MAYFIELD at 09:10 10 comments: Links to this post

Email ThisBlogThis!Share to TwitterShare to FacebookShare to Pinterest
A-TISKET A-CASKET
In old Persian scriptures a taboo expressed that anyone who touched a dead person was “powerless in mind, tongue and hand”. Evil spirits associated with the deceased struck them with paralysis. Well thank goodness that’s not true or my entire family would have been paralytic a hundred times over.

Ancient people also believed that high mountains and cliffs were the nearest places to paradise, so they buried their dead on cliffs in coffins carved out of a single piece of wood. 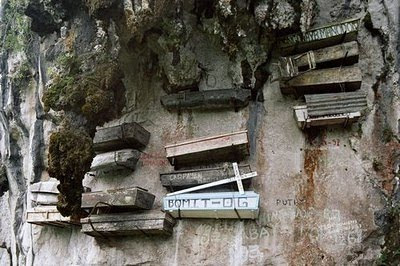 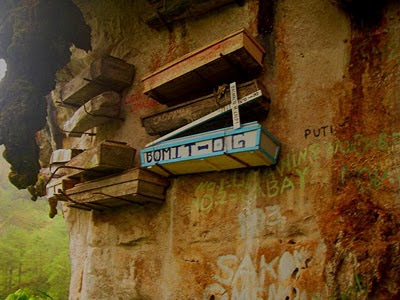 The Hanging Coffins of Sagada

Perhaps the most famous of the suspended coffins are those of the Bo people, a 3000 year-old minority group on the border of Sichuan and Yunnan provinces who believed that the higher the coffin, the more prominent or honourable the deceased. 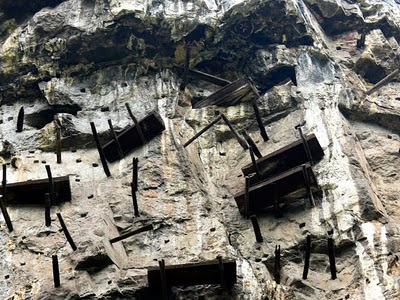 The Hanging Coffins of the Bo

How simple their coffins seem compared to the fussiness of Victorian designer coffins. My undertaker father always insisted that his children were well mannered, polite and sympathetic. That was tough enough, so I’m really glad he didn’t push us out the door onto the street corner and make us do this! 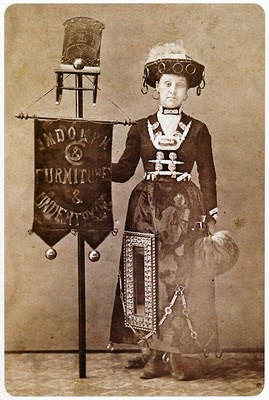 Ah, the subtlety of salesmanship. This woman models coffin accessories. The rings dangling from her hat are from coffin robes and could also be used as less expensive handles. Hanging on her dress are coffin chains and a full, proper sized frame to indicate that this coffin maker also made frames.

She wears two coffin plates, one around her neck and the other on her chest flanked between two coffin handles. Coffin plates were often inscribed with genealogical information and then removed and passed on to the family. 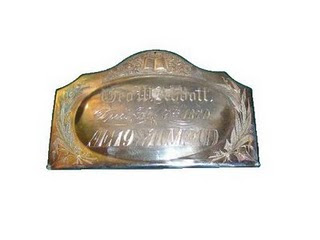 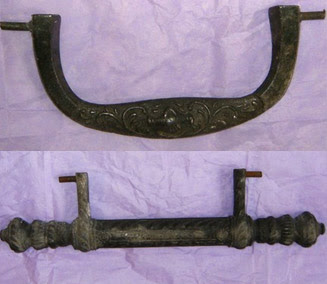 Although I can’t see them, I’m sure she has a few coffin nails on her person as well. 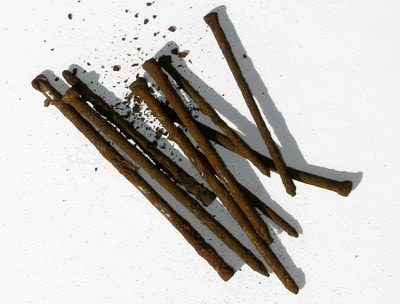 Coffin nails weren’t merely functional. A talented man, or woman, hammered nails to decoratively spell out the name of the deceased on the lid. 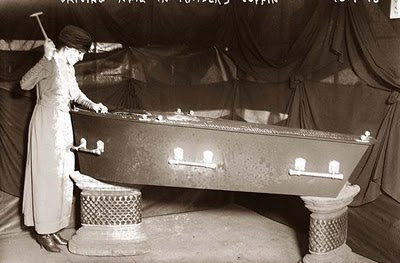 Today, online witches and herbal magicians collect and sell old coffin nails. Their use in rituals and as a tool to inscribe candles apparently makes their spells more powerful. Who knew? 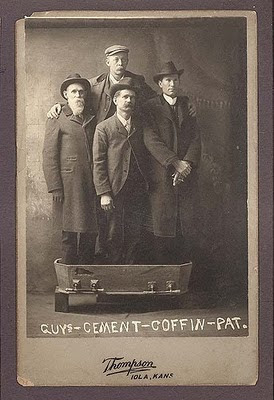 And we didn’t have one of these in our town either. 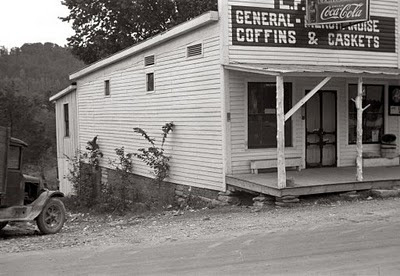 Instead, one room in our funeral home was designated as “the showroom” – a room full of caskets, each propped up on casket trucks. How many times did I crawl underneath a casket and take a nap? Can’t count them. It was the coolest room, as in temperature, in the whole rambling house. Maybe it was the congregation of those rectangles of steel in cool colors that chilled me to the bone.

We stocked only one coffin. An option for the modest budget, it was made of pressed wood and covered in grey-as-a-rainy-day felt. It sold for $395.00. Caskets were the preferred piece of funereal furniture in the South. North American undertakers hijacked the use of the word casket, originally a jewellery box, or a box in which to place precious things. Fair enough.

While coffins are lidded, caskets have a split top, the better to see you, my dear. I think most Southerners thought that embalming was invented solely for the purpose of keeping Great Aunt Flossie looking good, even after death. Caskets were most often left open during viewings and funerals. Psychologists say that it can be an important step in the mourning process to view the deceased. I don’t agree. I think it’s an incredibly personal decision. Viewing the deceased doesn’t make opening a closet full of untenanted clothes less traumatic. It doesn’t ease the effect of dozens of reminders. People mourn differently, heal differently, some not at all.

At the Mass of Our Lady of Prompt Succor there was applause when they finally closed the casket at the end of the service. That doesn’t happen often, not even for very bad people, and never in my memory. This was the scene of one of the symbolic funeral services that marked the fifth anniversary of Katrina. Hundreds of people dropped notes, cards and letters into the casket. One young girl’s note read, “Go away from us.” Many were hopeful that the symbolism of burying their grief would bring closure. Perhaps it did, or will. But one resident remarked, “You will never bury Katrina.” 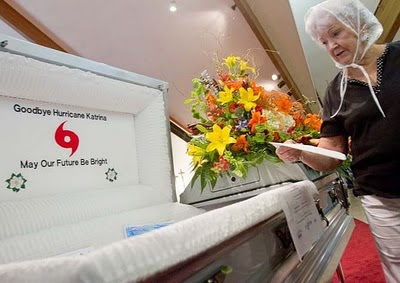 Posted by KATE MAYFIELD at 14:55 7 comments: Links to this post