I still remember what a thrill it was that first day I was able to string a few words together and read a sentence for the first time. It wasn’t long before many of life’s mysteries began to disappear like a cube of sugar on the tongue. Not only did books shed light, I was also quite taken with mundane things like my mother’s grocery lists. I felt I’d discovered her secret language. Then one day I was asked to produce my birth certificate at school. I removed it from my plaid satchel on the short walk to school and for the first time read:

Didn’t the penny just drop! Reading it in black and white somehow brought to the fore the very lifestyle I had taken for granted. And that our home was only up a staircase from all of this undertaking business, well, it cast an entirely new light on the thing.

Just as I was being to understand it all, as best as a young girl could, my father thrust upon me a meeting with the most eccentric character in our town. She immediately began talking the Edgar Allen Poe talk… you know, favorite stories, memorable characters, nevermore, the dreary dreary and Lenore. The woman all but insisted I read his works. I realize now that it was dreadfully demanding of her, as I was too young to fully grasp Mr. Poe’s writings. However, I rose to the challenge and when I ran across The Premature Burial my little heart skipped a beat.

“The grave was carelessly and loosely filled with an exceedingly porous soil; and thus some air was necessarily admitted. He heard the footsteps of the crowd overhead, and endeavoured to make himself heard in turn. It was the tumult within the grounds of the cemetery, he said, which appeared to waken him from a deep sleep, but no sooner was he awake than he became fully aware of the awful horrors of his position.” 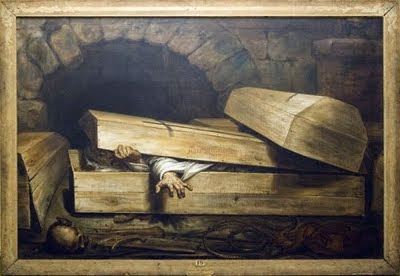 The questions, the worry, the browbeating that ensued! I entreated my father to defend his honour. Had he ever witnessed the kind of terror revealed in this shocking tale? “Of course not! The very idea!” said my father. I was then given a bare bones lesson on the effects of embalming.

He failed to inform me that reports of premature burials date back to the 14th century. I wondered if he ever learned this gruesome history in mortuary school; he didn’t like to talk about it so I never asked.

In 1661 the story of a butcher from Newgate Market in London was published in a pamphlet called “The Most Lamentable And Deplorable Accident”. Mourners were horrified when they heard a shriek from his tomb, but by the time his rescuers reached him it was too late. It was just one of many stories about premature burial avidly read by the public at the time.

By 1700 paranoia about being buried alive ran rife and in 1790 the security coffin was designed. One type involved a tube that protruded from the coffin. Everyday the parson would stroll through the cemetery and have a sniff down the tube. If he didn’t smell the effects of decomposition after a few days, the grave was exhumed. 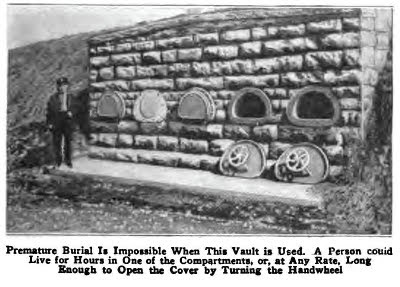 None were more popular than the Bateson Life Revival Device. A rope wrapped around the deceased’s wrist made for a worry-free burial. One tug on the rope and the iron bell securely mounted in a miniature bell tower onto the lid of the coffin sounded the alarm. 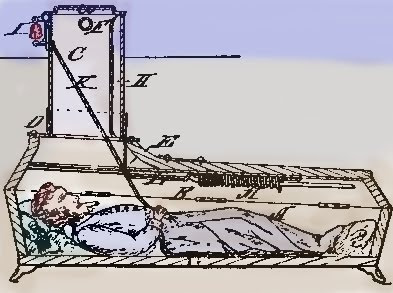 In 1902 Rufina Cambaceres a nineteen-year-old girl of Argentina died while dressing for her wedding. 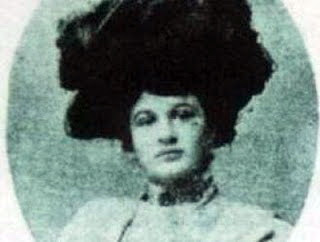 Although it was an unusual occurrence, three doctors certified that she was indeed deceased. The next day she was buried despite the view of several of her relatives who thought she had only fainted. At their insistence her coffin was opened. They gazed in disbelief upon the tragic result. Rufina whose poor hands and face were marked with injuries had been buried alive. Scratch marks were found on the inside of the coffin.

Her parents, deeply aggrieved and heart-broken, erected a statue at the entrance to her mausoleum in the famous Recoleta Cemetery in Buenos Aires as a warning against premature burial. 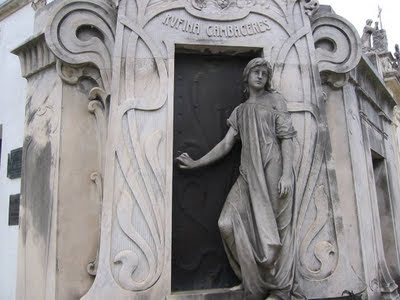 Perhaps the most vivid and recorded tale took place in Ireland. In 1705 the resurrectionists got wind of the recent burial of one Margorie McCall in Lurgan, Co Armagh. Margorie had been happily married to a doctor until she fell ill and succumbed to a fever. At her wake many of the mourners tried in vain to remove the valuable wedding ring she wore, but her hand, swollen from illness and death, would not allow it. After the wake she was buried quickly for fear the fever would spread.

The very night of her burial the grave robbers crept into the cemetery with their tools eager to claim the golden ring and steal her body to sell on to local surgeons. Digging through the freshly disturbed earth, they scattered the dirt until they hit the coffin. They removed the lid and their lanterns shone on Margorie and her ringed finger. At first they pulled and tugged at it, but her finger was so swollen they soon knew to continue was futile.

There was nothing left to do but try to hack off her finger because they certainly weren’t going to leave the ring for the surgeons. Just as Margorie’s finger began to draw blood she wakened from her stupor and sat upright, eyes wide open and began to scream bloody murder. It was said that the resurrectionists ran for their lives never to return to the trade again.

Margorie pulled herself up from her grave, walked through the cemetery - a sight of horror one might imagine - and continued home. She knocked on her own door, quickly opened by her husband and there she stood in her burial clothes, dripping with blood and her finger half hanging from her hand. The tale goes that her husband died of shock right on the spot. He was at some point buried in the same plot that his wife had once occupied. Margorie re-married and raised several children. When she did finally die she was buried in the same cemetery where she was first buried alive and where her tombstone reads: 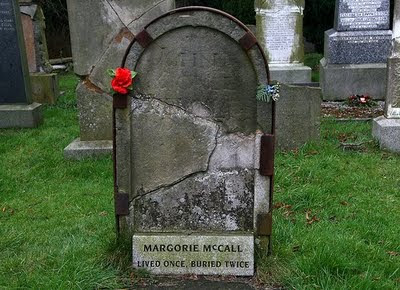 Posted by KATE MAYFIELD at 08:50 5 comments: Links to this post